Shropshire can’t offer city breaks as such, as the county doesn’t have any cities! But Shrewsbury, the county’s capital, is a hugely rewarding place for a town break. Its compact centre is almost completely surrounded by a very scenic loop of the River Severn and is packed with historic buildings, particularly from the Tudor and Georgian periods. Atmospheric passageways, beautiful churches and absorbing museums await exploration too.

The town – which some locals pronounce Shroosbury and others Shrowsbury, there’s really no right or wrong way – also has a plethora of snug coffee shops, characterful old pubs and a number of fine dining spots. And if shopping is your priority, you’ll be in seventh heaven. Shrewsbury’s Market Hall houses a strong contender for the best market in the country, and around town you’ll find many more one-off, independent shops.

You need two days to do Shrewsbury justice and take everything in, so we’ve constructed a plan for a perfect 48 hours. Bear in mind that not all the places listed below are open every day or throughout the year, so depending on when you visit you may have to tweak the itinerary.

Start at Shrewsbury’s Visitor Information Centre in the Shrewsbury Museum and Art Gallery. Pick up a free map, and maybe invest in one of the various leaflets offering self-guided walks.

Set off on a walk around the historic centre. Outside the museum is The Square, dominated by the Old Market Hall. Built by the Guild of Drapers in 1596, the handsome stone building is raised up on arches and pillars. On one side see the set of three leopards, known as loggerheads, which form part of the town’s coat of arms. Facing the square on the High Street is Owen’s Mansion, one of the finest of Shrewsbury’s many splendid black-and-white, half-timbered Tudor buildings – look up at the ornately-carved wooden finials above the gables. A few doors to the right along the High Street brings you to a Costa Coffee. This timbered building was restored in 1990 with a few contemporary twists. Mick Jagger’s features were the inspiration for the figures on the building’s left-hand side, and on the disc on the gable on the front façade you can make out the words “poll tax” by profiles of Margaret Thatcher and Michael Heseltine…

Shrewsbury has many narrow passageways – or shuts as they are sometimes called – connecting its main streets. One such is Grope Lane, which leads up to Bear Steps, a short, stepped and covered shut. Work your way through to St Mary’s Church. The most complete medieval church in Shrewsbury, it has glorious stained-glass windows and an elaborately carved wooden ceiling. The church spire is one of the tallest in England. Outside the west door, read the plaque that tells the story of how Robert Cadman came a cropper sliding down a rope from the spire’s pinnacle in 1739.

On the church’s north side, seek out St Mary’s Shut, the town’s longest covered passageway. It will take you through to Castle Street. Turn right and head down to Shrewsbury Library. Once it was Shrewsbury School, and in front of the building you’ll see a statue of the school’s most famous pupil, Charles Darwin. The great biologist was born in Shrewsbury and is name checked in various places in town.

Head back along Castle Street – past the Darwin Shopping Centre! – to The Square. Have a coffee break at Ginger & Co at 30 Princess Street: as well as first-rate coffee, they do very moreish home-made banana sponge bread drizzled with honey.

Then have a look around the free Shrewsbury Museum and Art Gallery. It covers all the key periods of the long and rich history of the town and of Shropshire generally: the Roman gallery is particularly good. If you want to keep things brief, go around with the museum’s “ten things to see” leaflet.

A meal at CSONS while in Shrewsbury is a must. The café/restaurant combines being completely casual and unpretentious while serving inventive, high-class food, with pretty much everything from local producers and suppliers. The Millichope Estate venison stew is a great choice in winter.

Walk off lunch with a stroll along the tree-lined promenade that hugs the River Severn as it loops around the town. Starting from English Bridge on the town’s eastern side, after about 10 minutes you pass by imposing Shrewsbury School on the hillside across the river. You’re now in The Quarry, the town’s sloping park, with The Dingle, a sunken ornamental garden complete with a lake, as its centrepiece. Look for the bust of one-time gardening legend and Shrewsbury Parks superintendent Percy Thrower.

Overlooking the park is St Chad’s, a highly unusual Georgian church in that it is round. Near the centre of its graveyard you can discover a headstone inscribed with the name of Ebenezer Scrooge: the 1984 adaptation of Dickens’ A Christmas Carol, starring George C Scott, was filmed in Shrewsbury.

Back along the river you’ll soon reach the Welsh Bridge. Just beyond it lies Quantum Leap, a giant abstract sculpture created in 2009 to mark the 200th anniversary of Darwin’s birth. Make of it what you will. It has been likened to human vertebrae, a dinosaur’s skeleton, the earth’s tectonic plates… and a Slinky toy.

For a pre-dinner drink, if the weather is good pop back to The Quarry park and take the Porthill Footbridge over the river to The Boathouse. It has a to-die-for riverfront terrace. 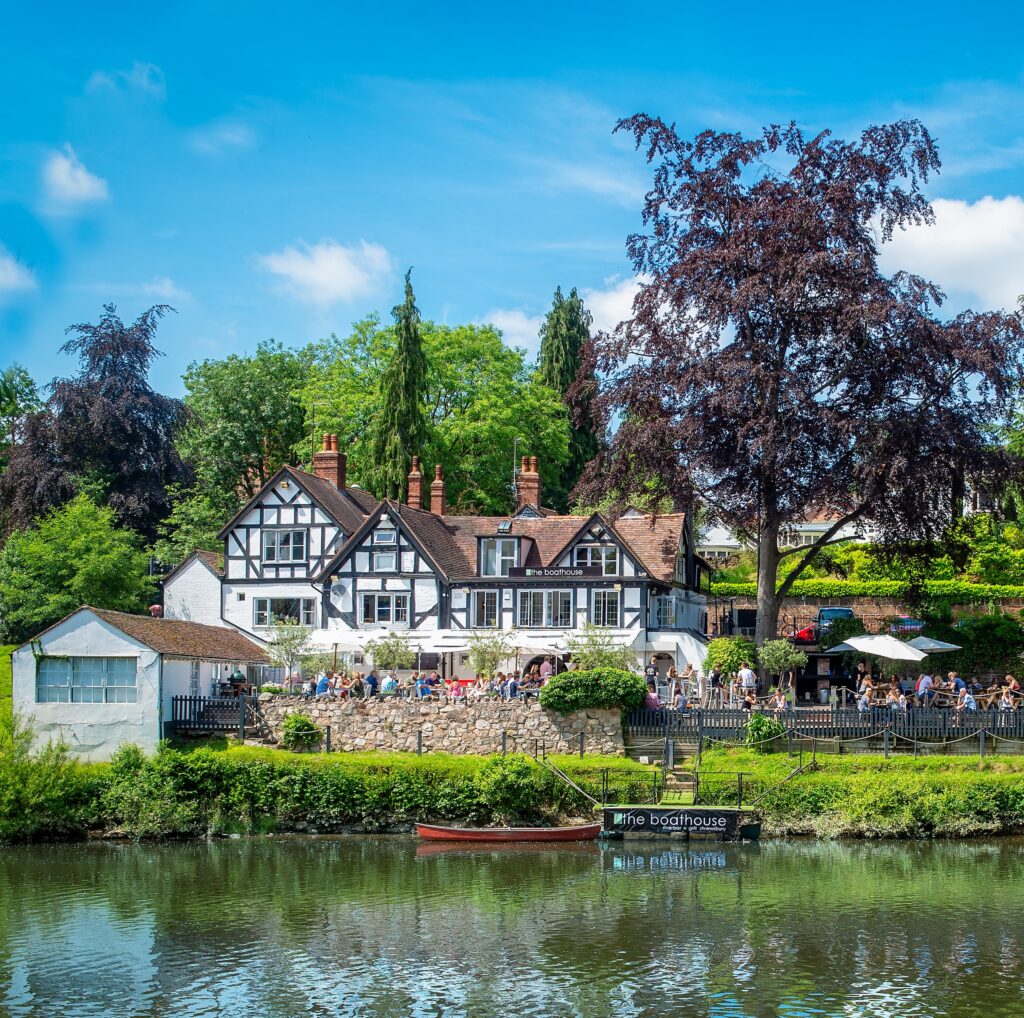 For dinner, push the boat out with a meal at the acclaimed Walrus, a small-scale restaurant with an open-plan kitchen in which young chef patrons Ben and Carla concoct creative, seasonal dishes based on Shropshire produce and using veg from their walled garden. Or dine at the Lion & pheasant on Wyle Cop. A smart, modern conversion of an ancient inn, its restaurant serves delicious and artfully presented dishes.

If you fancy rounding off the evening with a cocktail (or two), the place to go is decadent-looking Libertine on Butcher Row.

After breakfast, to get an understanding of what it was like to do porridge, make your way behind the train station to Shrewsbury Prison. Dating from the late 1700s and still used as a jail up to 2013, the prison is now a fascinating tourist attraction. Tours – self-guided or guided, the latter often led by retired prison officers – take you around the Victorian cell blocks, into the tiny cells themselves and out into the exercise yards. You also visit the macabre execution room, where a noose hangs over a trapdoor. The last execution in the prison happened in 1961. The prison is now often used for filming: Time, the recent, much-lauded ITV drama starring Sean Bean, was shot here. 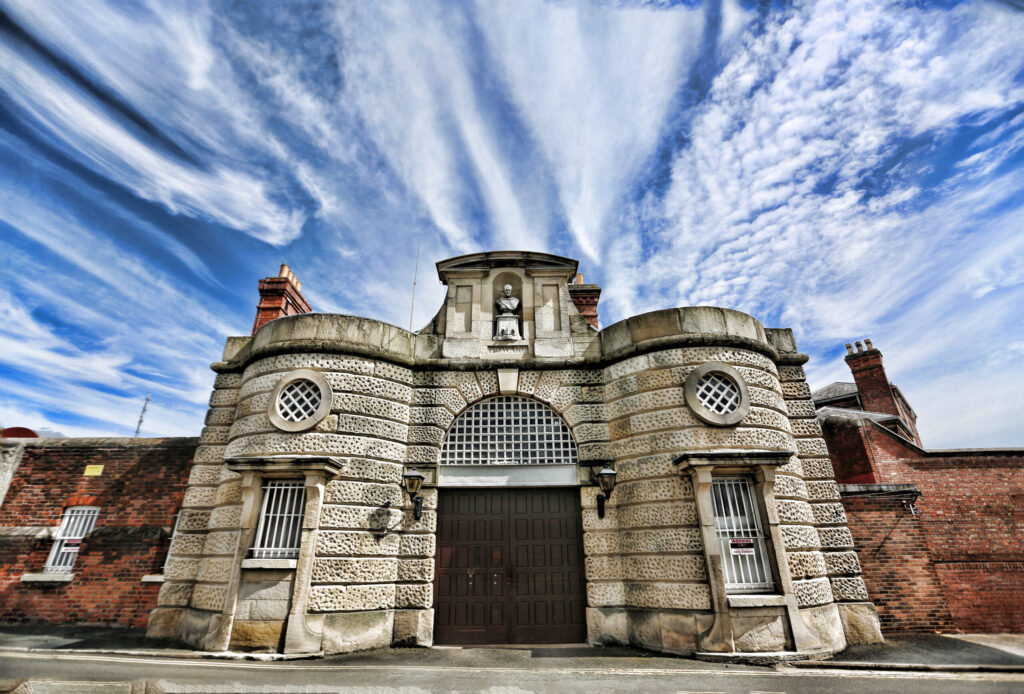 Have a quick coffee break in the cosy Shrewsbury Coffeehouse, then pop over the street to Shrewsbury Castle. From the summit of the Norman motte you get a good view over town, and inside the red sandstone building you’ll find a vast collection of memorabilia related to Shropshire’s regiments, from a lock of Napoleon’s hair to plague medals issued to soldiers serving in Hong Kong in 1894 during an outbreak of bubonic plague. 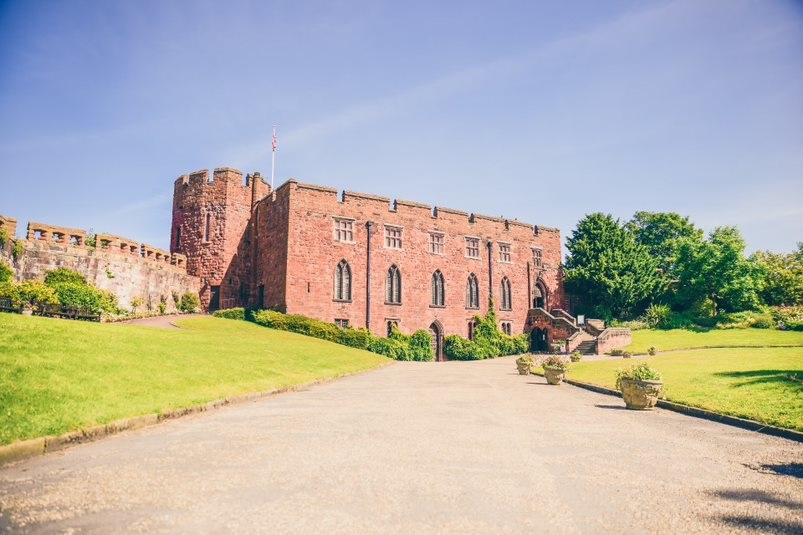 Head to Shrewsbury Market Hall. With over 50 traders on its two floors, it is reason alone to visit the town: be sure to time your visit to Shrewsbury to coincide with one of the market’s main opening days (Tuesdays, Wednesdays, Fridays and Saturdays). A mouth-watering array of local produce is on show in delis (seek out Cook and Carve), butchers and grocers, along with all sorts of other little stores and stalls selling everything from flowers to organic wines and second-hand books to hand-embroidered cards. The pick of the market’s cafés for lunch is The Bird’s Nest, a busy, open-plan eatery with a funky feel (its wifi password is GOODVIBES) and interesting, high-quality food such as a squash and taleggio toastie. 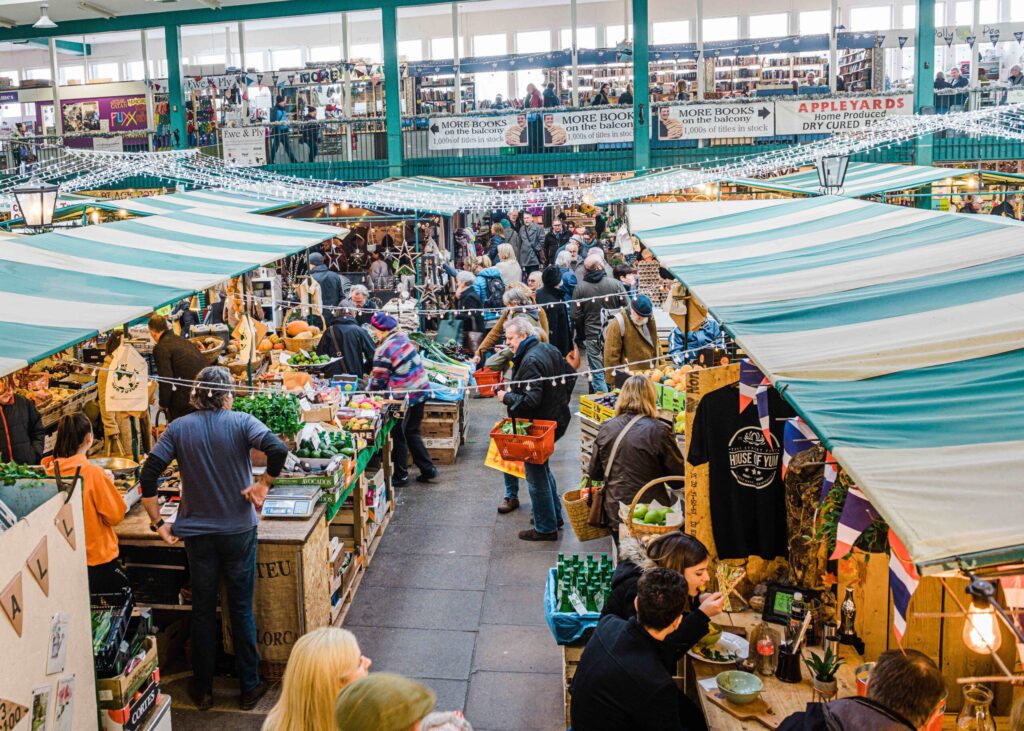 Time for more shopping. Shrewsbury is blessed with a profusion of independent shops. Many can be found on Wyle Cop, the historic street running from English Bridge uphill to the centre of town – its name means something like “road to the summit”. Wyle Cop is said to be the longest uninterrupted row of independent traders in the UK. Shops not to miss include Appleyards (the best deli in town), The Soden Collection (contemporary art), Wyle Blue World (lifestyle and homeware), and Tanners (prestigious wine merchants with wines showcased in its atmospheric cellars).

Make a short detour across the English Bridge to Shrewsbury Abbey. Impressive as it is now, it was much larger back in Norman times and surrounded by the monks’ community buildings – across the road by the car park you can see a 14th-century refectory pulpit, where the monks would have read out psalms during meals. Highlights inside the church include medieval tombstones carved with effigies.

Back in the centre, more independent shops await in The Parade Shops, from a fancy milliner’s to a store specialising in model kits of tanks and planes. The grand Georgian building, on a ridge overlooking the Severn, was once a hospital.

Shrewsbury is spoilt for choice for historic pubs, and many serve beer such Wood’s, Hobsons and Salopian made in Shropshire breweries. Have a pint in the beam-rich Three Fishes on Fish Street, or the livelier Nag’s Head on Wyle Cop: don’t miss the rickety remains of the timbered 16th-century mansion in the courtyard at the back.

For supper, Dough and Oil does excellent sourdough pizzas in industrial-looking surroundings. Or head over the river to the Olive Tree in the Frankwell district. The pretty restaurant is known for its highly-rated Mediterranean tapas.

You could take in a show at the Theatre Severn, a landmark modern building flanking the river. Or how about a film in the Old Market Hall? The ancient building where you started your 48 hours houses a tiny independent cinema and popular vaulted café/bar. 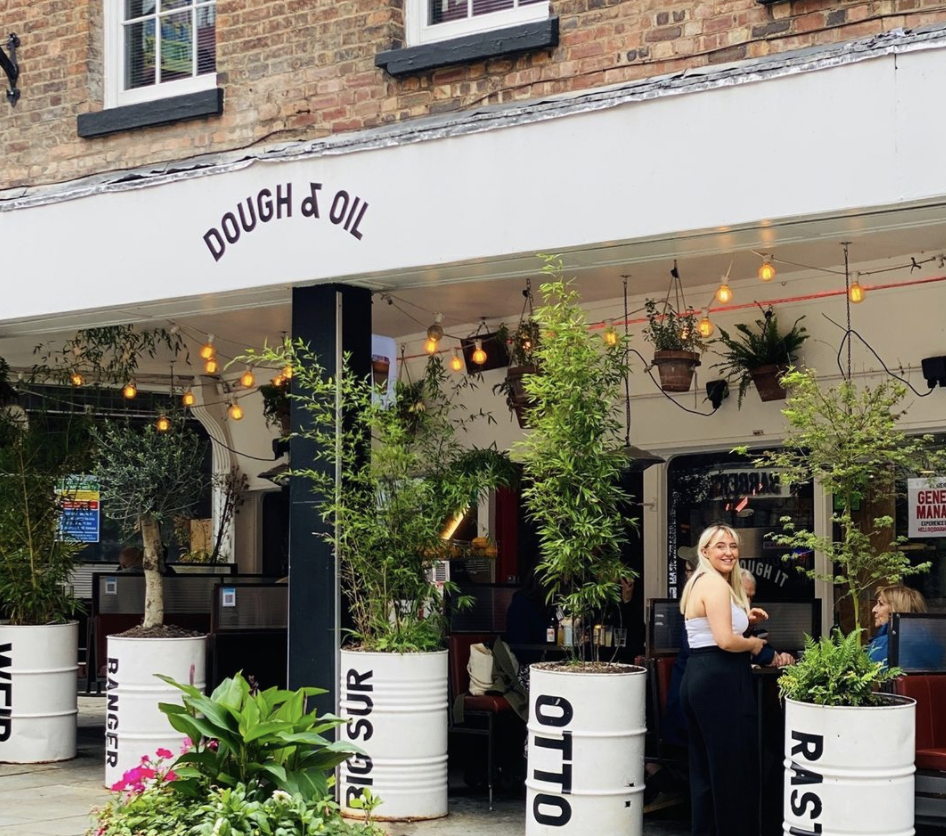 Darwin’s Townhouse is a very superior bed and breakfast. Its 20 bedrooms are split between a handsome Georgian building and a new wing set across a pretty walled garden. Bedrooms and public areas are decorated with maps, globes and all sorts of wildlife – monkeys, parrots, butterflies and much else besides – in reference to the famous naturalist. Breakfasts are outstanding: think croissants, muffins, fruit salad, cereals, plus a vast choice of cooked options from bacon sandwiches to eggs Florentine. There’s a help-yourself honesty bar in one of the elegant lounges.

The Lion + pheasant on Wyle Cop is not only a great place to eat (see above – evening day 1) but also to stay. Like the public areas, the 22 bedrooms are stylish affairs, their whitewashed walls, modern furnishings and wrought-iron beds complementing the building’s historic features. As a more affordable alternative to dining in the main restaurant, the Lion & pheasant also has a chic wine-cum-tapas bar, Ernest & Co. 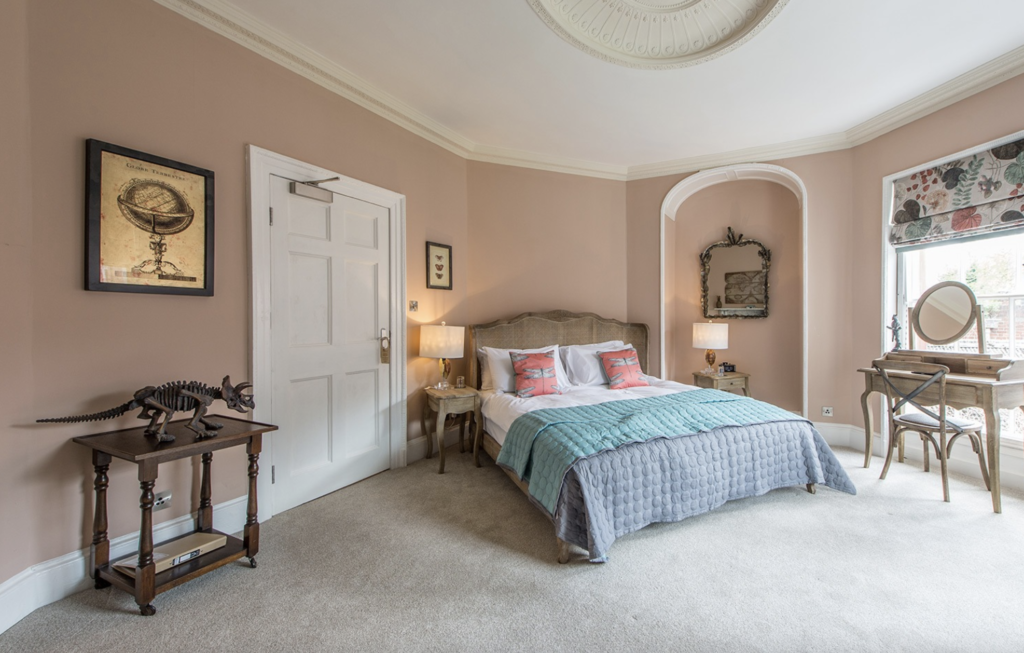 For a characterful self-catering base in the centre of town, look no further than Wesley House. Dating back to the 1500s, the two-bedroom property on Fish Street has beams and wood panelling galore, as well as a pleasant courtyard. John Wesley, founder of the Methodist movement, preached here in 1763.

You don’t need a car in Shrewsbury: everywhere you might want to visit is in easy walking distance. So come by train if you can – the station is near the centre of town, close to Shrewsbury Castle. More information on getting to Shrewsbury and parking: originalshrewsbury.co.uk/see-do/travel-information.

A great way to get an overview of the town’s history is to take a guided walking tour. The tours last 90 minutes; frequency of tours varies from daily in the spring and summer to Saturdays only in the winter.

If you’re visiting Shrewsbury between March and October, also consider a 45-minute cruise with live commentary on the Sabrina, from the Welsh Bridge to the English Bridge and back. Canoe hire from The Quarry park is also possible in the summer months.