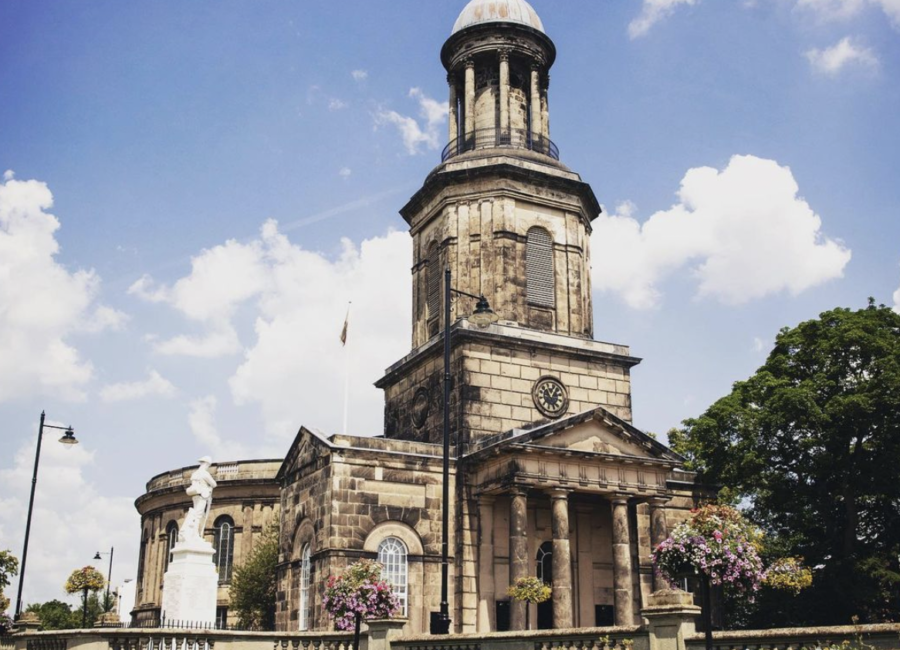 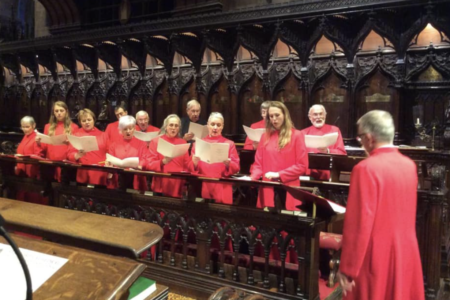 St Chad’s is a unique church because it is round.  With a capacity of 1200 people the building has the ability to make everybody feel close to the centre of the church.  At the heart of St Chad’s spirituality we believe that all are included in the body of Christ.  The round setting of the church complements this theology.  The three angels on the ceiling are a representation of the Holy Trinity, reminding us that we are always in relationship with God the Father, God the Son and God the Holy Spirit.

The uniqueness of the round building reminds us of the importance of this theological understanding.

Since early medieval times there has been a church in Shrewsbury dedicated to St Chad, first Bishop of Mercia in the 7th century. By the end of the 18th century the large but ageing building (see photo to left below) had fallen into disrepair, and cracks had appeared in the tower. The great engineer, Thomas Telford, advised that it was in danger of collapse, and he was right. One morning in 1788 the parishioners awoke to find they had a pile of rubble but no church. The centre photo below shows all that remains today of “Old” St Chad’s.

After much argument a new site was found on the derelict town wall, and the Scottish architect George Steuart, who had designed nearby Attingham Park and a church in Wellington, was commissioned. He submitted various designs, and although the Parochial Church Council preferred a rectangular one, ‘due to a misunderstanding’ he actually completed a circular plan that had been considered but rejected. Time was short, however, and it became the final design. Stones from old St Chad’s were used as foundations and the foundation stone was laid on St Chad’s Day, 2 March 1790.

The new church was opened on 19th August 1792 (see photo to right above). Its design differs from typical Georgian buildings, and mixes Ionic, Doric and Corinthian styles in its facade and interior. The central hall, with a sweeping double staircase to the gallery, is more like a country house than a church, as is the decoration on the ceiling of the nave. Yet the church is a child of its time, for the delicate banisters and the slender pillars supporting the gallery are early products of the Industrial Revolution then beginning in Shropshire.

The circular nave is unique, with pews arranged like a maze. The original ‘three-decker’ pulpit has been replaced by one in Arts and Crafts style in copper and brass, placed under the rim of the gallery. This opens a clearer view of the Sanctuary, which, bordered by Corinthian pilasters and columns, contains a fine reredos and a colourful window, made by the renowned Shrewsbury firm of Betton and Evans.

Caravanning and Glamping just how you want it! Looking for a UK holiday park that offers luxury and service as standard? So were we – that’s why we’ve carefully developed the Love2Stay resort to offer you everything that you need to unwind and reconnect with the world around you. We’ve worked through everything to the […]

An eco-friendly campsite offering 10 large pitches with bell-tents and luxurious and quirky en-suite bathrooms available right on the border where England meets Wales. Whether its a family camping trip, re-union, celebration or travelling solo, wildconTENTment can accommodate all of those needs. We are essentially offering a large(11 acres) camping  field offering only 6 pitches […]

The Quarry is Shrewsbury’s beautiful, 29-acre parkland, encircled by the majestic loop of the river Severn. The Quarry has been Shrewsbury’s most important site for recreation since the 16th Century. It still provides the perfect place to relax, enjoy walks, picnic, fish along the banks of the River Severn, or just let off steam. At […]